Trio Volant was formed in 2010 whilst all the members were studying at the Royal Northern College of Music. The Trio regularly give formal recitals and lunchtime concerts in and around Manchester, the North West and nationally from The Isle of Arran to Newport to Devon! Past engagements have included recitals for Darlington Music Society, Little Gaddesden and District Concert Club, Wisbech Concert Society, Buxton International Music Festival, Huddersfield Music Society, Harlech Concert Society, Harrogate International Music Festival, Lincoln International Chamber Music Festival and Maldon Festival of Arts amongst many others. The Trio particularly enjoy the opportunity to perform the lesser known reed trio chamber music repertoire.

The Trio were awarded the Dorothy Parkinson Memorial Award for Young British Musicians in 2017 and were Recommended and Selected Artists for Making Music 2019-2020.

The individual members have a wealth of solo, chamber music and orchestral experience between them. Alice is a busy freelance bassoonist and is in demand throughout the North West having completed her postgraduate studies at the Royal Northern College of Music. Bea enjoys a varied career as an animateur and freelance oboist. Tom divides his time between instrumental teaching, performing as a freelance clarinettist and examining for Trinity College, London. The group’s members have worked with The Halle, Royal Liverpool Philharmonic Orchestra, BBC Philharmonic, Sinfonia ViVa, Raymond Gubbay’s Manchester Concert Orchestra, Northern Chamber Orchestra, National Festival Orchestra and Liverpool Sinfonia amongst others. The trio are looking forward to a number of recital engagements in 2021-22 including Darlington Music Society, Harlech Concert Club, Saddleworth Concert Club, Grange-Over-Sands Concert Society.

Always keen to expand the repertoire, Trio Volant were delighted that in 2018 Anthony Gilbert (previous Head of Composition at the Royal Northern College of Music) kindly offered to write a new work dedicated to the Trio. Premiered at the Lincoln International Chamber Music Festival, "Return of the St Louis" is a reflective and thought provoking work and has been received with enthusiasm at a number of performances since. 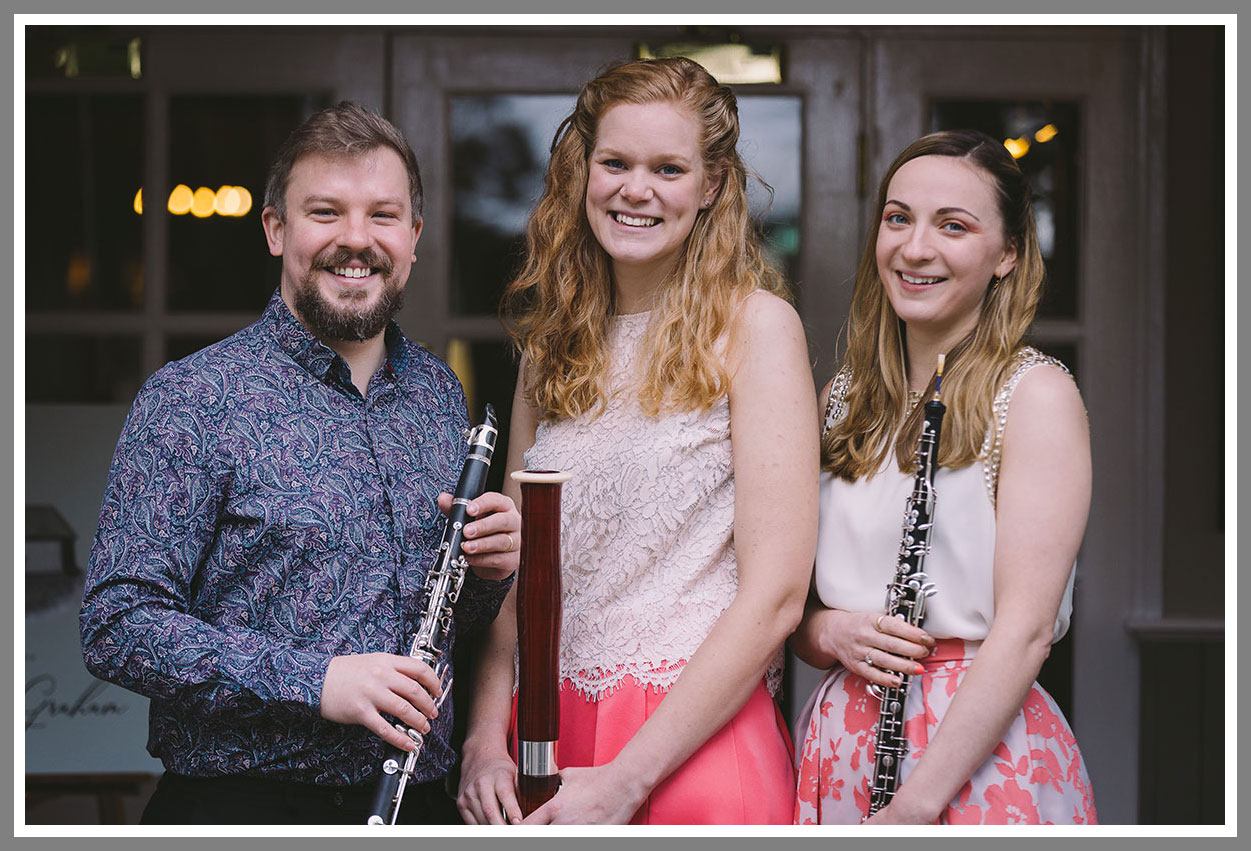 A diverse recital full of character and delivered with flair...

Huddersfield Music Society’s second concert of the season demonstrated the ‘trio d’anches’ – the typically French reed instrument trio of clarinet, oboe and bassoon. The exponents were the Trio Volant, formed at the Royal Northern College of Music in 2010 by Thomas Evans (clarinet). The word volant means flying, and this Trio flew through their repertoire with agility, virtuosic aerobatics and a variety of moods. The performance began by setting us firmly in French mode for the evening with a Pastorale by Canteloube and their own arrangement of Saint-Saens’ The Swan they immediately made an Italianate diversion with Glinka’s Trio Pathétique. Glinka wrote it in Italy during one of his prolific illnesses which were matched by his prolific love life. The players were peerless in their interweaving bel canto melodies – a doomed love affair as well as despair at ill health. The Trio made a second diversion from the French mode – literally this time with a delightful Mozart Divertimento – before the most intriguing piece on the programme, A tour d’anches (reeds in turn) by the neglected French composer Florent Schmitt (1870-1958). Here was a mercurial first movement, a crazy waltz with echoes of Erik Satie, a powerful emotional arc in the third movement neo-classical nocturne, and an incredibly brief finale which is a snapshot of Victor Hugo’s Quasimodo!

This vibrant young trio already have established individual solo and chamber careers and between them have played for all the country’s major orchestras and concert halls. Dedicated explorers of the reed trio repertoire they introduce an attractive programme with a distinctly French flavour! Trio Volant are involved with the pioneering arts and health projects Music in Hospitals, Superact, Music Unlimited and Jessie’s Fund and have emerged as the natural ambassadors for the new arts and health Creative Inspiration initiative in Shropshire. They are also a Member of Yehudi Menuhin’s Live Music Now Scheme.

The first half of the Trio Volant concert was excellent and, for me particularly, the Glinka Pathetique in D minor. Wonderful. Exquisite.

David Ridgway, Past Mayor of Kirklees

Hull Amnesty group feel so honoured and grateful that the work of poet and composer have been realised so expressively in performance.
Premier of Michael Betteridge’s ‘The Prisoner’ by Trio Volant January 2017

Trio Volant · Saturday, July 23rd, 2022 at 5:09am
@trio_volant
We had a super fun last concert of the season at Uckfield Music Society with Pianist extraordinaire, Luke Jones, joining us! Glinka, Desteney, Dring, Poulenc and Schmitt! See you all next season! https://t.co/PCcmc3JYkt
View on Twitter 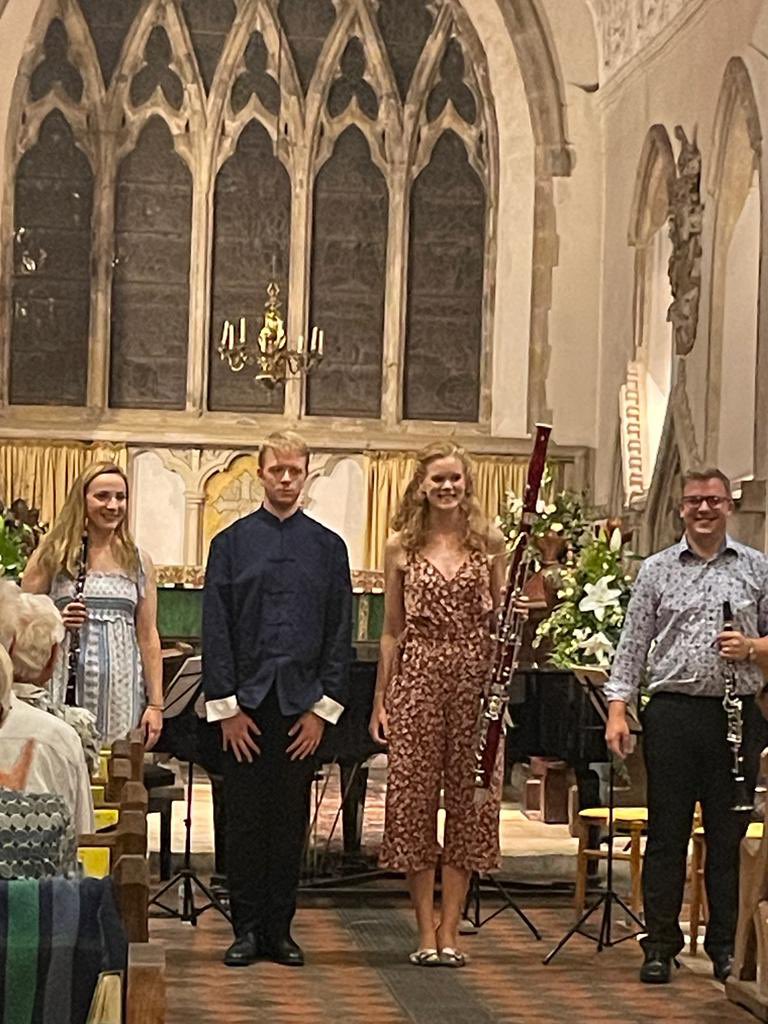 Trio Volant · Friday, June 17th, 2022 at 4:10pm
@trio_volant
We had a lovely time performing a lunchtime recital at Hyde Town Hall @TamesideCouncil earlier today. A really lovely space to play in- even on the hottest day of the year! Catch us next at Sedburgh Music Festival next week 21/06 7.30pm!
View on Twitter
1
0

Trio Volant · Sunday, April 3rd, 2022 at 8:49am
@trio_volant
After a very enjoyable concert at @AlnwickGarden earlier this week we are all set for another performance today for Little Gaddesden Music Club! Live music is back!
View on Twitter
0
1